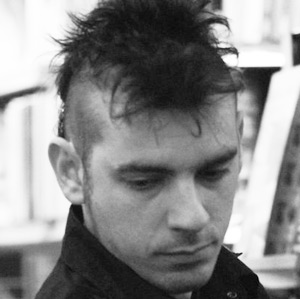 His love for horror culture started before his painting career, making him quickly develop his signature style: high contrast paintings with bright, as well as strong dark colors, curved strokes and shadows, and a particular attention to his character’s gaze and expression.

In 2014 Daniele worked with worldwide bestselling author Joe R. Lansdale, on the Graphic Novel “I Tell you it’s Love” for Short, Scary Tales Publications. Daniele’s illustrations have been included in books by Stephen King and Ramsey Campbell and he provided the art for Graphic Novels working with authors like Clive Barker, Marcello Fois and others.

In 2018 Daniele works on “Tommyknockers” by Stephen King (PS Publishing), providing the art for all the three wraparound covers, the interior illustrations and the boxset.

Daniele’s works include over 250 book covers for publishers from all around the world, most notably: “The Big Blow” by Joe R. Lansdale, ”Voices from the Borderland” by William Hope Hodgson, “Hellraiser: The Toll” by Alan Miller, “Deep Like the River” by Tim Waggoner and “Frankenstein in London” by Brian Stableford as well as artworks for various music releases, like: ”IX” by Shining, “Madman – Szpital Box” by :wumpscut: and “Laurestine” by So Hideous, and also the cover of the limited deluxe edition of the “Nightbreed: The Cabal Cut” Blu-Ray.

Daniele’s illustrations have been used as the set dressing of the film adaptation of Stephen King’s “CELL” directed by Tod Williams and starring John Cusack and Samuel L. Jackson.

Our Most Popular Items